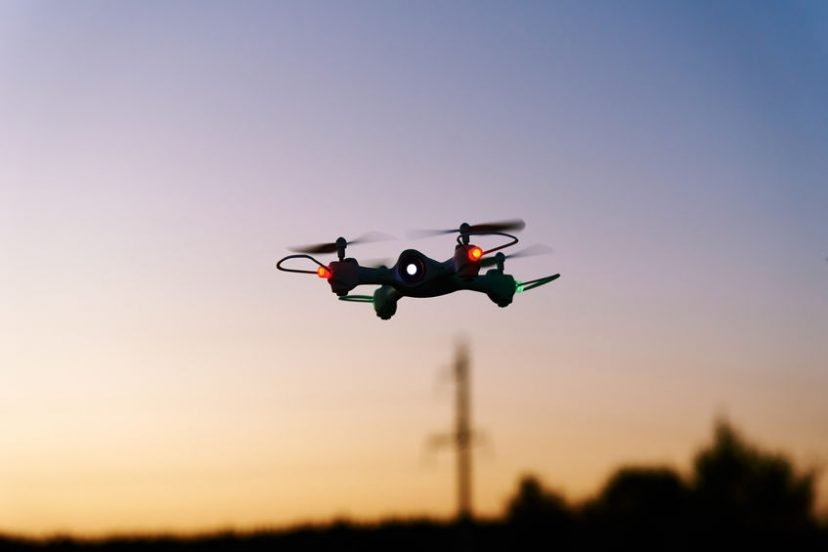 Is it a bird? Is it a plane? Or could it be a drone hovering over your house and backyard. Maybe. Let me show you how to quickly learn how to spot a drone at night.  It may seem like an infringement of your personal space and privacy. But before throwing a net over it or shooting it down with your son’s BB gun, make sure your next step does not involve breaking the law. With the lightning-speed advancements in drone technology, anybody and everybody can own a drone these days.  One may think that drone-flying is an activity pursued only during daytime hours, but surprisingly, many drone operators prefer flying their drones at night.

It is fair to say that not all drones are equipped for night-flying. But, there are tools and types of equipment available to detect the presence of drones in your immediate vicinity. Drone monitoring equipment is helpful and necessary in monitoring the air space above you day or night.

Two Immediate Signs of a Drone at Night

When you cannot figure out the shape of a flying object above you, check out the lights. There are 2 types of lights for drones. These are navigation lights and anti-collision lights. They can be white, green, blue or red LED’s. These lights are hardly visible during the day. But at night, especially when the air is clear, you can spot them from a mile away. Navigation lights are non-strobe lights used by the controller to see where the drone is going. Most drones already have these lights built in them. Anti-collision lights tend to blink rapidly going off in different directions. These lights are a legal requirement issued by the Federal Aviation Administration (FAA) when you use your drone at night or for a certain number of reasons.

Apart from flashing strobe lights, a drone will also make a distinctive sound. One may hear it as a continuous high-pitched buzzing. Drone manufacturers are constantly coming up with more improved versions of their products and many models are certainly quieter than their earlier counterparts. If you do hear constant buzzing overhead when outdoors at night, look up and check for lights accompanying the sound.

A microphone is an able assistant in detecting nearby drones. Even better, a set of microphones strategically placed could be useful in setting up a triangulation indicating where a drone might be coming from. Microphones are relatively low-cost and readily available to purchase online or in store. However, they do not work well in noisy environments and have a short range (300-500m).

Already an integral part of a modern home security system, video cameras have become ubiquitous in residential neighborhoods everywhere. Cameras with infrared or thermal imaging capabilities work best to spot drones at night. One key advantage to having video cameras is recording evidence of drones in the vicinity if needed for legal purposes. However, remember that a video camera is not always capable of taking clear images, especially with fog or other adverse weather conditions.

A radio frequency (RF) analyzer or explorer is a great tool to have in your drone detecting arsenal. This is used to determine radio communication between a drone and its controller. These handy devices are either standalone or can interface via a usb cable with a computer that has an advanced data acquisition and analysis program. As with cameras and microphones, you don’t need a license to operate an RF analyzer. Some of the more advanced RF analyzers can triangulate a drone and its controller when using multiple units spaced far apart. But before purchasing one of these useful devices, make sure you do not live in a crowded RF area. This would hinder the efficacy of your analyzer and it may not be able to track or even detect autonomous drones.

Radar is a system used to detect an object. Many of us may be more familiar with radar detectors that help monitor our driving and prevent us from getting a speeding ticket. Drone detector radars, however, are an entirely new breed of tracking equipment. These specialized devices utilize micro-doppler radars that not only detect speed differences but do so within a moving object. Drone propellers tend to move in opposing directions hence a micro-doppler radar can identify a drone as opposed to say, birds. Drone detector radars are not as easily obtainable and are sold by only a handful of companies in the country.

Drone Detection Apps to Spot A Drone At Night

With mobile phone apps constantly being created and utilized for thousands of products, activities and services, it stands to reason that there are a few that deal only with drone detection. A quick search in your mobile app store would give you a variety of free or paid options. Many of these apps are used by drone owners who need them as navigational tools. Some even have additional features such as traffic alerts, no-fly zone maps and weather forecasts built in. The most popular drone detection app for non-drone users would be the Drone Watcher App. This app alerts the user when a drone is within monitoring range. The Drone Watcher has been downloaded by many commercial entities as a useful tool to track if their businesses are being spied on.

I See a Drone. Now What?

Having a drone fly over your private property can be amusing, annoying, disturbing or even downright dangerous. But the last thing you should do is use force and crash the offending flying object. Some may consider using a drone jammer, but we caution you to think twice before taking this option. Drones are considered aircraft by the FAA and it is illegal to take action to willfully cause one to fall from the sky. On the other hand, current laws dictate that it is legal to fly a drone over someone else’s property. The Federal Aviation Authority (FAA) controls the air above your home and property lines do not extend to the sky, unfortunately. Unless the drone falls right on your house or yard, there is nothing you can do about it hovering over your head.