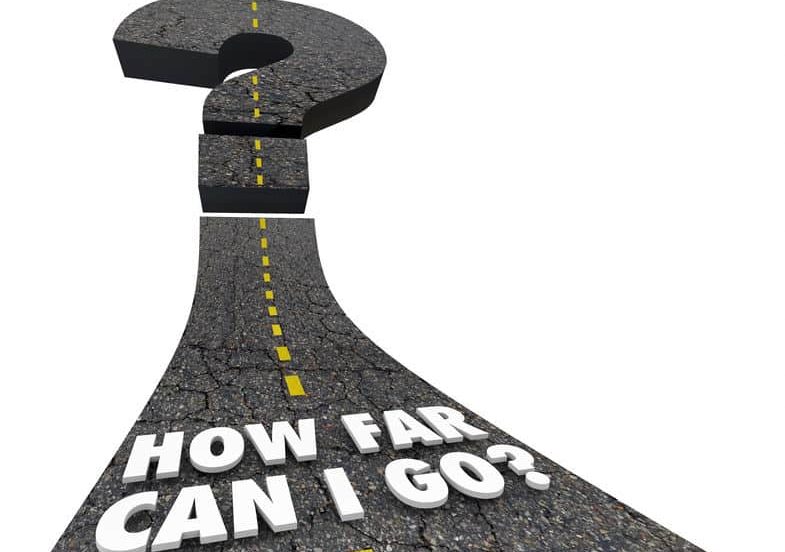 You’ve been out a few times and witnessed some drones that seem like they can fly forever. That’s inspired you to buy your own drone, as you’d like to achieve awesome flight too. Before you do, you’re wondering how far can a drone fly?

Depending on the manufacturer, drones can fly between 300 meters (0.186 miles) to more than 6 miles. The drones with the greatest flight distances are typically produced by DJI, including the Mavic 2 Zoom at 5 miles and the Mavic Air at 6 miles.

In today’s article, we’ll explain more about the average flight range of a drone. We’ll also highlight some UAVs that can fly especially long distances. If you want to extend the flight range of your drone, we’ll even tell you how. You’re not going to want to miss it!

How Far Can the Average Drone Fly?

Before we get into all that, let’s first discuss more about how far a drone can fly.

The average range of drone flight differs based on the drone manufacturer. For example, a smaller brand like Hubsan doesn’t produce the longest-flying drones. Their H501S goes 300 kilometers at most, which is 0.186 miles.

Taking things a bit further, the Altair Aerial Outlaw SE1080p Camera Quadcopter can fly only 0.6 meters, which is 0.4 miles.
A brand like Yuneec sells some drones that can fly at that range as well, such as the Q500+. More expensive Yuneec UAVs can go further.

For example, the Typhoon H is capable of flying 1.6 kilometers or 1 mile.

Other brands like Xiro and 3DR are good if you want to fly decently far. The Xiro Xplorer V can travel 1 kilometer or 0.6 miles max, and the 3DR Solo can achieve distances of 1.5 kilometers, which is the equivalent of 0.9 miles. These are considered some of the furthest-flying drones from these brands.

DJI, which is one of the most popular names in drones, retails UAVs that can fly the furthest. We’ll talk more about those in the next section. In the mid-range, the DJI Inspire 1 Pro travels 2 kilometers or 1.2 miles at most and the Mavic Mini can go 5 kilometers or 2.5 miles at a clip.

The Matrice 100 and the Matrice 600 are both capped at 5 kilometers max, which is 3.1 awesome miles.

What Drones Fly The Longest-Range?

What if you want to fly even further than 3 miles at a time with your drone? It is possible, but you’ll need a DJI drone to make it happen. The following UAV models can all fly 4 miles at least, with several of them exceeding that flight distance.

Your first option is the Phantom 4 Pro, which is capable of flying 7 kilometers or 4.3 miles at a time. Since this is a photography camera, whether you take photos and videos with your drone for fun or as a career, the Phantom 4 Pro will serve you well.

This DJI drone includes dual coding, long-range control, and multi-directional obstacle sensing to keep your flights seamless and safe. The 20-MP image sensor is only an inch in size. All videos are captured at 60 fps in high-quality 4K, and a Burst Mode lets you take photos at 14 fps. This drone has a magnesium alloy and titanium alloy body for rigidity and less weight.

Another DJI drone that can travel 7 kilometers or 4.3 miles is the Mavic Pro. Although its production is discontinued at current, you can find used and relatively new Mavic Pros online if you shop around.

Though its successor the Mavic Pro 2 is an efficient UAV, so too is the original Mavic Pro in a myriad of ways. It can descend 3 meters a second, which is 9.8 feet, and reach total heights of 16.4 feet into the air.

The original Mavic Pro is ideal for taking photos and videos as well. Its ISO range for photos is 100 to 1,600, and the video ISO range is 100 to 3,200. You can also use still photography modes, including interval, EV bias, auto-exposure bracketing, burst shooting, and single-shot modes.

The Inspire 2 also sticks within the 4.3-mile range, which is quite remarkable. A step up from the original Inspire in lots of ways, the Inspire 2 includes a CineCore 2.0 processing system for images. Now you can capture higher-quality video in Apple ProRes (5.2K) and CinemaDNG/RAW (6K) if you also have a Zenmuse X7.

The Inspire 2 takes a mere couple of seconds to reach speeds of 50 MPH, and it tops out at 58 MPH so you can cover more ground over longer periods with this UAV. A self-heater within the drone even keeps the Inspire 2 flying strong and proud in colder temperatures.

The Mavic 2 Zoom is one of DJI’s longest-distance fliers, as it can traverse 8 kilometers or 5 miles at a time. Although it’s also an expensive offering, the Mavic 2 Zoom has many features that make it worth the money to drone enthusiasts. These features include dolly zooming, HDR-quality images, aperture adjust, reduced noise, hyperlapse, and obstacle sensing in a slew of directions.

The Mavic 2 Zoom can reach speeds of 44 MPH. Insert an SD card to store 128 gigabytes of your most high-quality photos and videos. A three-axis gimbal keeps the drone steady even at faster speeds so your work doesn’t turn out blurry or shaky.

The original Mavic Air can fly further than the other DJI drones we’ve covered. Its max flight range is 10 kilometers or 6.21 miles. That makes this handy, foldable drone a great one to own if you like to push your UAV to the limit.

This DJI drone features three-axis stabilization when panning, rolling, and tilting. You get every photography mode you’d expect in a UAV from this brand, as well as incredible video resolution options. You can shoot footage in HD, FHD, 2.7K, or 4K Ultra HD quality.

The sensing system included with the original Mavic Air can go downward, backward, or forward depending on your needs in the moment.

How Long Can You Fly a Drone?

Can You Do Anything to Extend the Range of Your Drone?

What if you already purchased a drone a while ago but you’re not thrilled with its max range? Is there anything you can do outside of buying a new drone to increase that range? Indeed, the following suggestions may be able to help.

Your issue may not necessarily be that your drone can’t fly far, but that your UAV is limited whenever you use it. In such a situation, check your antenna. If the radiation pattern is obstructed, then your drone’s flying range will be as well.

Don’t always necessarily assume that someone is trying to jam and take down your drone, by the way. The circuitry within your UAV can create issues with antenna radiation patterns.

Sometimes increasing your drone’s flying range is as simple as switching the frequency. A higher frequency limits your range, so by turning down your drone’s frequency, you can expand its max range.

Don’t Focus So Much on Power

Your quest for a further-reaching drone may have led you to a power amplifier. A power amplifier promises to increase your power and thus your range. That said, products of this nature can be somewhat misleading.

You see, your drone’s range is the equivalent of your UAV power when converted to a square root. If you were to increase your power by twice what it usually is then, you do get a range boost, but by a mere 40 percent thereabouts. That’s probably not what your power amplifier advertised, right?

A power amplifier can work to an extent, but it’s rarely a cure-all for getting more range out of your drone.

Today’s UAVs can easily fly 5 or 6 miles at a time, especially if yours is a DJI drone. Brands like Yuneec, Altair, and Xiro have some pretty impressive, long-flying drones as well.

If flight distance is something you really want out of your drone, you should now have all the info you need now to make an educated shopping decision. Best of luck!