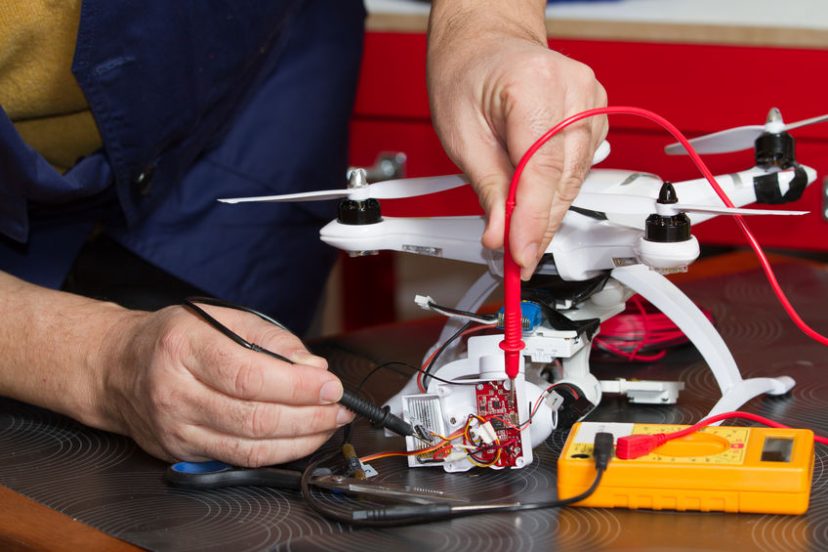 Each time you go to use your drone, you turn on the UAV, grab your remote, and begin soaring. Have you ever wondered more about the mechanics of your drone? For instance, what’s in a drone that makes it work?

Drones work thanks to the following internal and external equipment:

You may know how a GPS and a camera work, but how do these function within a drone? What does a rotor or altimeter do? Keep reading, as we’ll introduce and explain much more about each of these parts in this article!

How Do Drones Work: What Goes on Inside and Outside

These days, you can select an app on your smartphone, activate the GPS feature, and get driving in a matter of minutes. Your drone can do something a little similar thanks to its built-in wireless connectivity. This allows you to download an app to your smartphone, tablet, or even a laptop and then set up the flight path you’d like your drone to take.

Drones include a series of rotors that allow them to control flight as well as propel higher into the air. The rotors consist of blades that can spin freely. When they do this, the rotors force the air around them downward. This air comes back up, as it naturally does, giving some lift to the rotors. If you want more lift, then simply increase the speed of the rotors.

Rotors allow UAV pilots like yourself to pull off such drone maneuvers as descending, climbing, and hovering. If faster rotors let you go higher, then slowing down the thrust of the rotors will start the descension of your drone. That puts you in a good position to land your UAV.
To climb in the air, it’s important that the weight of your drone is less than the non-zero upward force of the rotors. You can achieve this by speeding up the rotors.

Finally, to hover, you need to match the gravitational force of the air with the rotor net thrust. This will allow your drone to linger in the air at a consistent speed.

You can also turn your drone using the rotors. Two of the four rotors should be positioned clockwise, then the other two must move counterclockwise. The clockwise rotors are diagonal from each other, as are the counterclockwise ones.

What does change in moving from one direction to another is the rotor thrust. For example, let’s say you wanted to fly your drone forward. The rotor thrust would have to move forward as well.

To keep the rotor thrust in the necessary direction, you either slow the first two rotors’ rate of speed, or you might increase the speed of the rear rotors. Either way, the drone’s weight never exceeds the total thrust force, so your drone won’t start flying upward at the angle of the rear rotors. It also won’t dip down at the front.

Your angular momentum doesn’t change when flying like this, either. That’s because the front rotors are moving clockwise and the ones in the back are going counterclockwise. It’s not quite the same mechanics at work as turning your drone with rotors, but it’s somewhat similar.

How Does The Motor Work In Drones

Let’s get a little more specific into the inner workings of a drone. You know that a drone has rotors, but what allows these to work? That’s the motor, of course. Each four rotors has a motor with a propeller connected to it. Without the motor, the rotors couldn’t descend, ascend, hover, climb, turn, and go forwards or backwards.

This motor is always electric.

Directly related to the motor is the drone’s controller. Since the motor is electric, it needs a certain amount of voltage fed to it. This amount can change depending on what you’re trying to do with your drone. For instance, if you want to tackle a more complex maneuver, such as climbing, then the motor will need more power than it might if you’re only hovering.

The controller will provide power at varying voltages. Most controllers come as part of a computer control system for your drone. The computer manually manages the power the drone gets via the controller so you don’t have to.

After all, that’s a big responsibility to undertake. Should you give the drone too little power, it might not be able to fly and could crash. Too much power can be just as bad, as you could overload the system and cause it to fry.

Your UAV’s computer control system should also come with a joystick for operating the drone. You just take care of that job and the computer’s controller will do the rest.

Every drone also includes an altimeter. Sometimes also referred to as an altitude meter, this component measures the altitude of your UAV, or its height from the ground. To generate your altimetry reading, barometric pressure gets calculated. This relates to weather, specifically the air pressure outside where you’re flying your drone.

If you’re worried you’ll have to become a weatherperson to fly your drone, you won’t. Your drone uses either a barometric altimeter or a pressure altimeter. Either calculates both barometric pressure and related altitude automatically.

There are two reasons why it’s good to know the barometric pressure and the altitude when operating a drone. For one, you can get a good read on the weather, which lets you decide whether today is the right day for flying. Further, you can decide the best and safest conditions in which to land your drone.

Sometimes, washes, a type of air vacuum, can appear when you least expect them. A wash does not behave in a predictable manner, and if your drone gets caught in one, it could crash.

Related to the altimeter is the accelerometer. You can probably guess what this is by the name alone. The most classic and recognizable example of an accelerometer in your day-to-day life is the one found in your car.

There are far more vehicles that rely on accelerometers each and every day. These include spacecraft, aircraft, ships, and boats. We can’t forget your drone as well.

Besides measuring proper speed, accelerometers come in handy for many other uses. For spinning machinery, this device can determine the vibration of each machine, ensuring it doesn’t get excessive. If it did, the vibrating might indicate an issue with the machinery.

Digital cameras and tablets have an accelerometer of their own. This keeps the display facing the right direction. With drones, you can ensure your flight path remains stable with an accelerometer. Especially when used in conjunction with an altimeter, these tools give you the freedom to avoid air vacuums and make safe landings each time.

How Does The Camera Work In Drone?

Sure, drone cameras are cool for taking photos of sights you yourself can’t necessarily reach, but these devices have a greater purpose. UAVs with a camera built in act as a second set of eyes should your drone get away from you. The freedom to track your drone if it gets out further or higher than you can see lets you take it to new heights, quite literally!

Even better is the importance of drone cameras in search and rescue missions. We’ve talked extensively on this blog about the many uses of drones, and rescuing others is one of their best functions. If a drone can travel where we cannot and the camera gives us a glimpse into where the drone is, it’s possible for the UAV to locate survivors who need help in a disaster. This greatly assists first responders in saving as many lives as possible.

Conclusion of How Do Drones Work

Your drone is loaded with a variety of parts and components that allow it to achieve and maintain flight. You can turn, hover, and fly your drone forward or backward thanks to the rotors. The motor is electric and keeps the rotors running, while the controller powers the motor.
The altimeter and accelerometer measure your height and speed so you can always land safely. With a GPS, you can track coordinates to select a flightpath. Last but not least, cameras let you monitor your drone. Each of these parts are incredibly important, and–when combined–give you a high-functioning, amazing drone!