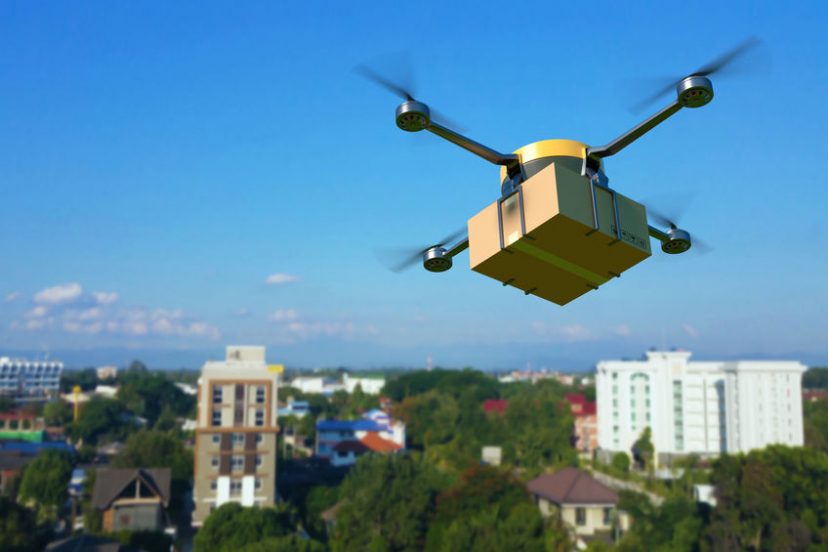 Drone technology has advanced rapidly from the bulky first-generation drones to drones that carry medicine and other things across the world. The amount of weight a heavy-lifting drone can carry is dependent on a few different factors.

There are, in fact, drones that can carry people. These drones are normally referred to as heavy-lifting drones, and they can carry a number of different heavy items. The technology is still in development, but it is definitely possible. It all comes down to a few things, including how much power the drone has. If you want to know which drones skip ahead to get 5 models that can lift heavy objects such as a person.

There are a couple of different heavy-lifting drones on the market, but China is in the works of using a passenger drone for regular flights. Continue reading to learn more.

What Kind of Drones Can Lift People?

Heavy-lifting drones are considered professional drones and are usually used in military or industrial environments to carry extra weight from point A to point B. you may also see these drones referred to as an unmanned aerial vehicle or UAV.

Drones have been used for all kinds of different purposes, from photography to crop spraying. The technology has advanced quickly, and it was only a matter of time before one was made durable enough to carry a person.

These military and industrial UAVs are designed to carry heavy items, not necessarily a human. Drones of this magnitude don’t have a place for a person to sit inside the drone, though, so they aren’t considered passenger drones.

In 2016 China developed a passenger drone and began testing it in 2018, but more on this below.

The GRIFF 300 is popular because it is currently one of the only drones on the market that can carry this much weight.

How Much Weight Can a Drone Lift?

There are many variables at play that factor into how much weight a drone can carry. The main four factors are:

Things like the batteries, rotors, propellers, and other parts that are considered constructional don’t count towards the payload.

The wind can be a drone’s worst enemy, especially a heavy-lifting drone. If the aerodynamics and strength of propellers aren’t properly worked out, the drone won’t be able to lift much of anything. Not only that but if there is a large amount of moisture in the air, it will also affect the lift capacity.

Battery life and overall drone control are two more factors that play a huge role in how much weight a drone can lift. You can have a drone that is capable of lifting heavy objects, but if it can’t carry the object for very long, the drone isn’t worth much. The same goes for control. It requires an insane amount of control to carry heavy objects through unpredictable weather conditions without dropping the object or the drone breaking.

The Science Behind Heavy Lifting Drones

It isn’t always the case, but with drones, bigger is usually better. The bigger the rotors, the longer the drone will fly and the heavier payload it can carry. Some simple physics shows that it really doesn’t matter how many rotors you have either, it is more about how big each rotor is and if the rotors can effectively produce a balanced airspeed.

The rotor essentially works like a fan. The spinning blades work by pushing the air down. The air that is pushed down by the rotor then pushes back up against the rotor because, as you know, for every action, there is an equal and opposite reaction. The drone lifts off the ground by controlling these two forces.

To increase payload while decreasing power to allow for longer flight time, the surface area of the rotors must also increase. That said, sometimes, the bigger drones with larger propellers still can’t carry the maximum payload longer than a few minutes. In cases such as this, the drone will require a larger battery to accommodate the power needed to lift and carry the payload.

How does it stay balanced?

In the case of a quadcopter, two rotors spin clockwise, while the other two spin counter-clockwise. The two rotors that are spinning the same direction are diagonal across from one another. This even distribution of airflow keeps the drone stable and balanced.

The same goes for turning. Depending on which way you want to turn, one diagonal pair of rotors will slow down, while the other two speed up. This action will allow the drone to rotate one way or the other while staying balanced.

However, when a drone goes forward or backward, it is because of an increase or decrease in speed from the two rotors or the back to rotors.

What if the payload is dropped?

If the entire payload is dropped all at once, this is actually the best-case scenario for your heavy lifting drone. Think of it this way: When you are holding a sack of groceries, and the bottom falls out, all the groceries fall to the ground at once, and your head flies up as a result.

The same idea applies to a heavy lifting drone when it loses its payload. The drone will initially fly up because of the high motor speed that was needed to carry the payload. Then, the spontaneity of the acceleration will cause the flight controller to react. This will cause the motor speed to reduce immediately, and the drone will begin to regain balance and control.

The worst part about losing a payload is only losing part of it. For instance, if the payload attached in three separate places, and only one of the attachments breaks off, it will force the drone into an uneven position, which will likely end in the unfortunate event of your drone crashing.

The first drones to be initiated into the general public were amateur and toy drones. In today’s market, industrial functions are being created that are revolutionizing commercial aviation. In other words, it is likely that we will see drones in everyday life aviation within the next few years.

As mentioned above, China has been working on a passenger drone for the last few years, and they are now to the point where they are about to start regular flights with said drones. The passenger drone is called the Ehang 184, and its purpose isn’t that of long transports across countries.

The main purpose of the Ehang 184 passenger drone is to rid the world of traffic problems. Ideally, the future will be full of these air taxis to transport people throughout cities and reduce the number of cars on the road.

Several thousand test flights have been performed since its creation, and the Ehang 184 can reach the following:

Lift has its own 18-rotor “Hexa” aircraft weighing in at 432 pounds and is available for short 10-15 minute flights. It hasn’t been fully rolled out to the public yet, but can be expected within the next year or so.

Drones are quickly changing the way the world thinks about travel. It is perfectly viable to consider a world in the near future where passenger drones are roaming through the air. Limitations for how high the drones will fly are sure to be put in place as to not mess with airplane travels, but nonetheless, the reality is fast-approaching.

Weather conditions are one of the biggest obstacles for safe and regular drone travel. In order for the world to welcome air taxis, we will first have to tackle two of a drone’s biggest enemies:

For now, though, the heavy-lifting drones that are on the market are reserved for lifting inanimate objects during clear weather conditions for short periods at a time. It’s safe to say the world is still a few years away from unmasking the true potential of unmanned aerial vehicles.

The Five Best Heavy Lifting Drones On the Market Today

The XFold Dragon X12 U11 is the overall best heavy lifting drone, purely because of its stats. Its maximum payload is 100 pounds, its flight time is three to six hours, and it can be flown in tough weather.

It has multiple configurations all on the same frame, including:

Not to mention it folds down to 30% of its size so you can easily transport it anywhere.

Yes, even cinematographers need heavy lifting drones. The XFold Cinema is designed specifically for the professional cinematographer. It has the ability to carry large cameras, including:

This drone also has multiple configurations ranging from 4 to 12. Its max flight time seems to be around 40 minutes, so it gives you just enough time to get your shot.

Alongside the military-grade XFold Dragon and professional cinematic drone the XFold Cinema, the AX Green Bee 1200 steps in at number three for best heavy lifting drone. It can carry about 45 lbs for a max flight time of 20 minutes. It’s a great pick for those that don’t have extensive heavy-lifting to do but need more than a cinematic drone.

The FREEFLY ALTA 8 Pro might only fly for a mere 20 minutes, but it’s powered with Freefly waypoint technology that sets it apart from the rest. This drone is considered to be one of the most affordable options for a drone that can carry a heavy camera.

Perhaps the most interesting thing about the FREEFLY ALTA 8 Pro is that it weighs less than it can carry.

Many in the aerial film world love this drone because they can still take amazing video in the toughest of weather and terrain conditions. This is definitely a drone that can do it all.

Any one of the above-sated heavy lifting drones is ideal for nearly any situation. If you are in the market for a heavy-lifting drone, be sure to pay attention to how much weight it can carry, along with the flight time because if you can’t fly for very long, it doesn’t really matter what the maximum weight is.