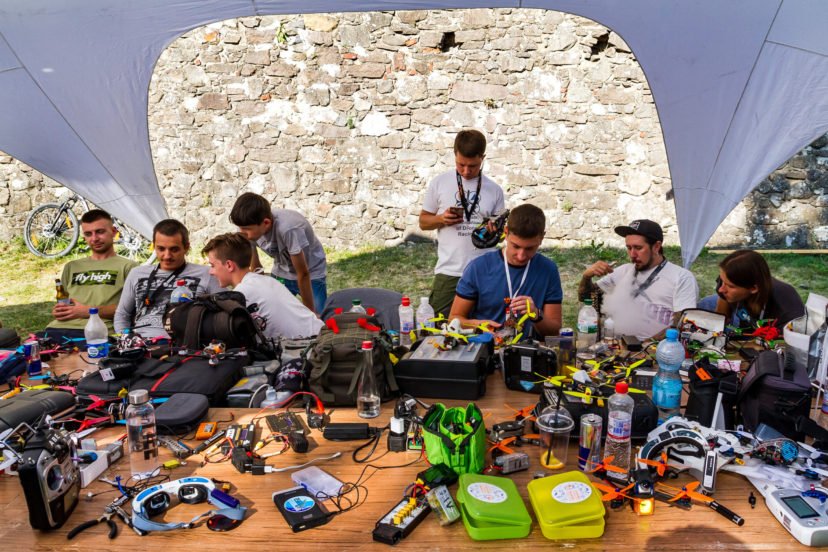 There are so many drones on the market. It can be hard to know where to start if you want to enter the world of drone racing. It’s true that you can race with any drone in a local meet or with a few friends, but competitive First Person View (FPV) racing leagues have certain standards that the drones have to meet. To compete in the commercially sponsored racing leagues set up by the Drone Racing League (DRL), it requires an expertise of the sport but also more advanced and high-quality equipment. If you want to get up and running fast with equipment start here. Now, that we have the equipment lets get you up to speed.

Drone Racing is different than aerial photography drones. A racing drone is more about the special components, but it also won’t have an automatic stabilizer like the photography drones do. Once a racing drone takes off, it is the pilot’s job to keep it flying. Racing drones also have a shorter battery life, usually lasting about 5 minutes rather than 25 or 30. Racing drones are designed to fly fast and make quick movements, which zaps the life of the battery rather quickly.

For those that are unaware, a First Person View or FPV drone is required for all sanctioned meets. FPV basically means the drone flies out of direct view from the pilot. The pilot wears a pair of FPV goggles that streamline drone footage from its onboard camera. There is also an antenna on the aircraft that helps with the transmitting of the footage to the goggles. These are all very important components of drone racing, so it is vital to invest in a good camera, goggles, and antenna.

Another name for a racing drone is a quadcopter or “quad” as they’re called by most pilots. They are given this name because they are propelled by four rotors. These quads can be purchased ready-to-fly (RTF), almost-ready-to-fly (ARTF), or built from scratch. ARTF drones may come with an FPV frame kit, but they allow further customization than the RTF drones, which are fully assembled. Of course, building your own from scratch will take the most expertise, but it is oftentimes cheaper in the end.

Whether you buy RTF or customize your own quadcopter, you will need these basic components for a complete FPV racing system:

A Great Place to Start

Drone racing can be intimidating if you have never flown before, especially because of the price tag attached to the sport. Typically, just for the drone itself, you are looking at anywhere from $300 all the way to $600 for the more high-end racing drones.

You may be interested in purchasing a mini drone instead before making the leap into the racing drone atmosphere. Mainly because your racing drone will also cost money to repair it in the inevitable event that you crash it. Not only that, but the mini drone can take more of a hit and flies a bit easier than a racing drone. They are also a lot cheaper, so if you break one, it won’t hurt your wallet as much.

A micro quad, as these are often called, is great for beginners because it flies with ease, even in the smallest places. It’s designed in a way that allows you to bounce off things like walls and other objects in the house, and it won’t damage the aircraft.

There is a micro quad called The Blade Inductrix that has the upgrade capability to transform it into a functioning FPV drone, which makes it an even better choice for beginning pilots. It already comes with the monitor; you just have to purchase a pair of goggles, and voila!

Upgrade to an RTF or an ARTF Aircraft

Once you have a handle on flying an FPV drone, chances are you will soon want to upgrade from the mini. Deciding whether to buy an RTF aircraft or to build your own can be tough. Each choice has its advantages and disadvantages.

Buying one that is already ready to fly can be pricey, but it will get you in the air quicker. Building your own aircraft will take weeks or even months to build, depending on your knowledge level. Granted, there are YouTube videos that give step-by-step instructions on building from scratch. However, if you’ve never done it, you will probably make a few mistakes along the way, which takes time to fix.

That said, building a drone will give you great learning experience, and you’ll feel more comfortable with your drone, knowing it inside and out. This will also enable you to make modifications to your aircraft at any point with ease, which is something pilots do a lot. Most professionals fly a customized quadcopter and make improvements constantly on its speed and agility.

No matter what you choose, you always want to buy things with warranties. You also want to check the availability for replacement parts on whatever you buy because you will crash, and your drone will need repairs. That just comes with the territory. Even professional pilots will sometimes crash or collide in a race.

How to Start Racing

You’ve spent time familiarizing yourself with the sport and flying a mini quad, and now you are eager to get racing. Well, the good news is, finding races is the easy part! It isn’t recommended to try and jump right into professional races, but there are Facebook groups and online Drone Racing Forums that can act as a gateway for you to meet other pilots near you. You can attend unofficial races in your area, and even create your own course to invite people to race on.

The most important thing to remember is to practice. Consistent practice is the only way you will get better. Challenge yourself, take risks; it’s okay to make mistakes. That’s part of it. As you get better, you can start introducing your own unique flair to racing. The best pilots have their signature tricks and things during their flight.

You’ll know if and when you are ready to go out for bigger races. You may just want to keep drone racing as a hobby, which is perfectly fine! However, if you decide to try and make it professionally, these groups and forums are the best place to start. You will naturally be guided toward the Drone Racing League eventually, which will most likely be the start of your professional career in the sport.

Above all else, safety is the number one priority. Drones can be replaced, but an injury could end in a lawsuit. Below are some safety precautions to always keep in the back (or front) of your mind:

• Before each flight, always make sure no one else is using the same channel you are.
• Racing drones are fast. Their high speeds and spinning blades can hurt people and things they come in contact with. It is always a good idea to fly in open areas away from public places.
• LiPo cells are the best batteries to use for drone racing, but when you crash, and the battery is damaged, it can be dangerous. It could potentially explode or catch fire. Always check the battery after a crash. If it is damaged, do not use it.
• Never fly a damaged drone
• The spinning rotors can hurt you, which is why it isn’t recommended to try and catch a falling drone or one that is trying to land.
• Have a designated landing zone that is clearly marked off
• FFA regulations state that you must always stay in the visual line of sight (VLOS).
• It is always best to have someone with you to spot for people or animals and any trees or buildings you might not see in your goggles. FPV flying limits your peripheral vision immensely.

There is a lot to learn about drone racing before you even start flying, but it is an exhilarating hobby with professional career potential. Knowing your aircraft in and out is the best way to become better, and a big part of this is just practicing as much as you can. No matter what drone you decide to buy or build, flying is the best place to start. Join a local group and get to know the people of the community. They will introduce you to local races to get you in the air whenever you desire.