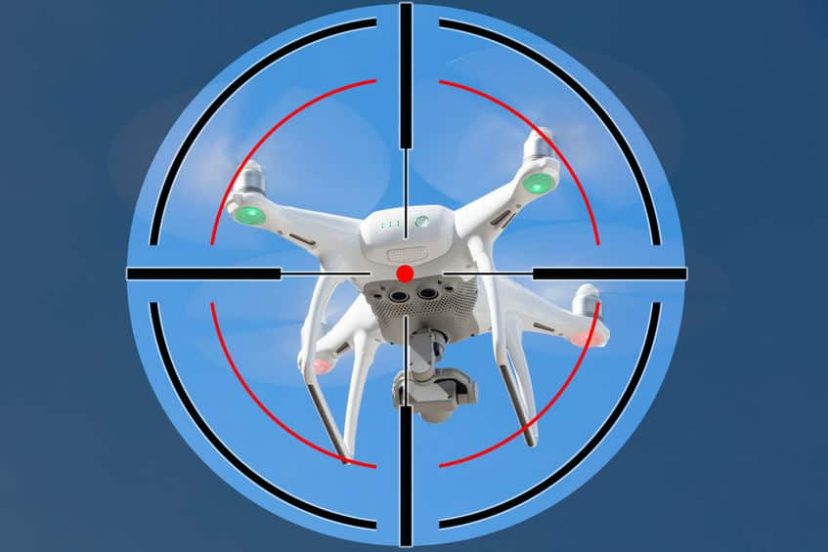 Do you follow the rules when you operate your UAV? Hopefully, the answer is yes, but just because you’re a law-abiding drone pilot doesn’t necessarily mean everyone else is. Have you heard the story about the drone pilot flying out of legal airspace and their drone being seized. The authorities used a drone jammer. Is drone jamming a thing? What does this even mean?

A drone jammer is a device that interrupts a drone’s radio frequencies, preventing the drone pilot from communicating and operating. Your drone may begin flying back to you or drop down to the ground nearest where it’s at.

Still curious to learn more about drone jammers? You’re in luck. In this article, we’ll tell you everything you need to know about these devices, including what they do, why they exist, whether they’re legal, and how to know if your drone has been hit by one. Keep reading!

What Is a Drone Jammer and What Does It Do?

At first glance, a drone jammer almost resembles a gun, and its purpose is almost as imposing.
If you spot a drone flying at night with a drone jammer you could actually hinder the pilot from controlling the drone.  A drone jammer sees a UAV flying even a few meters away, they can use the jammer. With a directional cone of 15 to 30 degrees, a jammer can be quite effective.

So how exactly does a drone jammer work?

Your drone relies on radio frequencies when you communicate with it (such as pressing commands on your remote control) as well as when you transmit photos and videos from the UAV. A drone jammer will override these radio frequencies, filling them with electromagnetic static and noise at a rate of 2.4 or 5.8 gigahertz.

Those two frequencies are very specific because they have to be. If a drone jammer tapped into other frequencies, it’d be possible for the jammer to interrupt radio bands such as public broadcasts, cellphones, and legally-manned aircraft.

After triggering the drone jammer, the UAV with interrupted frequencies will soon land to the ground. It may first head back to you, the drone pilot, before doing that, but sometimes it lands nearest wherever it was jammed. If the drone’s GPS and radio frequencies both get locked up at the same time, the drone should just drop without coming back to you.

Why Are Drone Jammers Used?

Now that you understand what drone jammers are and how they work, you’re curious about which situations would ever warrant their use. There are many of these, so let’s explain them more now.

If a drone pilot uses their UAV nefariously, such as to hack into a data center, they need to be stopped. Jamming up their drone’s signal is one such way to put a quick halt to this and other instances of drone hacking.

Drones can deliver food and packages, but criminals rely on UAVs for smuggling contraband and traveling with it across the skies. This is certainly a smarter bet than transporting drugs by car. Most of these criminals will send contraband via drone across the border or even get the contraband into prisons.

By jamming a drone carrying contraband, the UAV can be stopped, the contraband apprehended, and the criminal eventually put behind bars.
Emergency Response Interruption

Some instances of drone jamming aren’t quite as sinister. Perhaps accidentally, a casual drone pilot may interrupt emergency responders with their UAV’s frequency. Sadly, some drone pilots will do this on purpose too.

Either way, for the safety of everybody, this drone needs to be taken down, stat. It’s a drone jammer to the rescue in this situation.

Flying Outside of Legal Airspace

The FAA has rules about where your drone can fly, even if you have a license. Once you fly too far outside of legally mandated airspace, and especially if you’re causing problems per the above scenarios, your drone needs to be brought down to earth, literally. A drone jammer will land the drone, although not necessarily safely.

In some instances, it’s not one drone that must be stopped, but a handful. Drone swarming, as the name suggests, occurs when UAVs gather in a group and behave as one. They may try to overtake facilities or aircraft with the expectation that there’s power in numbers.

Although it would require quite a powerful drone jammer to take down this many UAVs, it is possible and necessary if the drones are a threat.

Any terroristic behavior, such as transforming your drone into a biological weapon or transporting bombs, needs to be curtailed immediately. These behaviors pose a major threat to our welfare and safety. Rather than shoot at the drone, which could cause any explosives to detonate, a drone jammer gets the drone to the ground with no threat to nearby life.

Are You Allowed to Legally Own a Drone Jammer?

You see now how drone jammers can benefit the greater good, but still, you have your concerns. If someone gets their hands on a drone jammer and uses it for any UAV in the sky, that would be a huge problem. If your drone landed a good distance away from you and the person with the drone jammer apprehended it first, you may never see your UAV again. If you spent thousands of dollars on a DJI drone, then that’s an especially heinous offense.

Is it legal for the average person to own and operate a drone jammer? It depends on where you live. In the United States, you can’t use a drone jammer or any other means of stopping a drone, even if the person operating the UAV is doing so illegally (such as flying outside of their allowable airspace). Your best bet would be to call the police and let them deal with it.

The only ones who should use a drone jammer in the US are first responders, police, and military.
In other parts of the world, drone jammers are allowable, but only the non-GPS kind. This means the jammer can’t track your drone, which gives you a much better chance of finding it and grabbing it first.

Even if it was legal to own and use a drone jammer where you call home, that still doesn’t necessarily mean you would want to. The cheapest (and least effective) drone jammers cost $30, while the military-grade, high-end ones are in the ballpark of $30,000. That’s a hefty price tag for the average civilian to pay.

What Other Options Are Used to Apprehend Drones?

As handy as drone jamming is, especially against terroristic threats, it’s not the only option military and first responders have. Here are some others.
Firing Down the Drone

We talked before about how in a terroristic threat, it’s not advisable to shoot at the drone in question, as it can cause a major explosion. If a drone is only carrying contraband though, then shooting the UAV is a good alternative. Both the drone and the drugs would be destroyed.

This is also an option in cases of drone swarming and if a drone is flying in illegal airspace, although it would have to be far away enough from other aircraft and buildings that there’s no threat to anyone else’s safety in shooting down the offending drone.

In that latter scenario, first responders or the military may use drone netting. This calls for a larger aircraft to ascend above the rogue drone and drop a net on it. The net ensnares the drone and drops it to the ground. It may or may not be useable afterward depending on how far it fell.

How Would You Know if Your Drone Is Jammed?

Let’s say for example’s sake that hypothetically, the worst did happen, and your drone was jammed. How would you know?
You can tell in the following ways.

You Can’t Communicate with Your Drone

You try to input commands to your drone and it no longer listens. This can either be a catastrophic failure with your drone, or it’s being jammed.
Your Drone Begins Flying Towards You Without Your Intervention

Another good way to tell your drone is jammed is, after not being able to communicate, your drone begins routing its way towards you when you didn’t ask it to.

You don’t even necessarily get the luxury of your drone coming back in your direction. Some drone jammers will make the UAV drop where it’s nearest, as we said before. This makes collecting the drone easier if it’s suspected of being involved in drone swarming, terroristic activities, or transporting contraband.

Drone jamming is usually reserved for the military and police to put a stop to crimes like smuggling drugs or invading facilities. A drone jammer messes with your UAV’s frequencies so it stops operating.

If your drone ever gets jammed up, trust us when we say you’ll know. Fortunately, this is a fate you can avoid by always following the FAA’s drone operating rules.