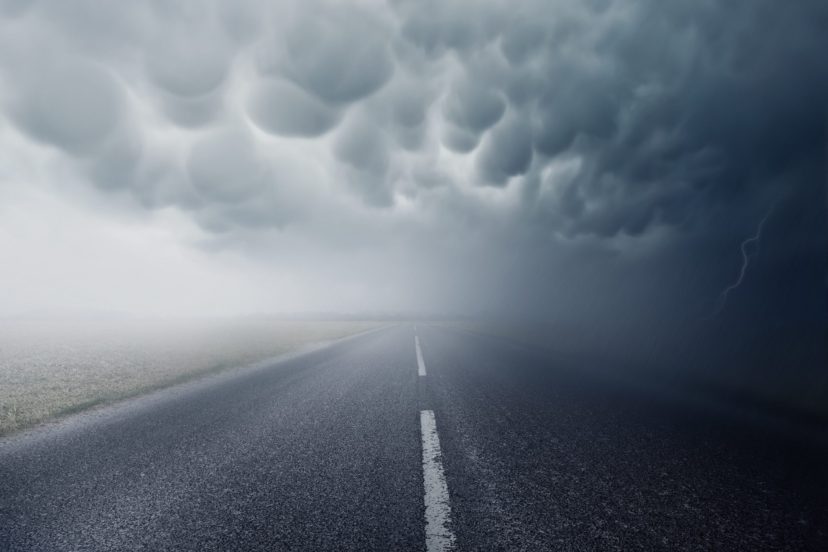 In sunny skies, your drone is free to fly…well, following FAA rules, of course. What if you’re ever caught in a rainstorm with particularly harsh winds? Maybe it begins snowing even though the forecast showed the day as clear. Can drones fly in bad weather safely? One might think it depends on the severity of inclement weather?

Drones are not designed to fly in bad weather. Exposure to water could cause short circuiting, for one. Even if that doesn’t happen, with reduced visibility, it becomes hard to see where your drone is, increasing your chances of a crash.

In this article, we’ll explain in much more detail about what can happen to your drone if you end up outside on a rainy, snowy, windy, or foggy day. We’ll also delve into whether temperature extremes can affect your drone as well as how to safely navigate in sudden bad weather. Keep reading!

You never planned on taking your drone out in inclement weather. The last time you checked the forecast, the weather was supposed to be clear. Maybe it wasn’t the sunniest day, but you didn’t see rain on the forecast, either.

Yet now you’re in a situation where the winds are kicking up and the rain is falling. Will a few minutes out in the bad weather really hurt your drone that much?

Oh yes, absolutely. Here are some issues that can occur when operating your drone in poor weather.

Like you try not to go swimming with your phone in your pocket because it will be destroyed, the same is true if your UAV gets wet. Drones are not designed for exposure to water. While there are a few waterproof drone models out there, such as the SwellPro Splash Drone and the Spry Plus Waterproof Drone, if yours doesn’t say anything about being waterproof on the packaging, then assume it’s not. In fact, we’ll say the majority of drones should not be exposed to water. That includes UAVs from major brands like Yuneec and DJI.

Since your drone isn’t waterproof, if it gets wet, it could short circuit. This may kill your drone for good. Even if it doesn’t, the repairs would be quite costly.

Seeing as how rain is water and all water is wet, in a slight drizzle, it’s still not a good idea to take your drone outside. You could unintentionally throw away all the money you spent on it, as you’d have to replace it.

That goes for all precipitation, by the way, including snow. The snow will melt into water and could cause just as many problems as rain.

There’s another reason to avoid setting off with your drone on a snowy day (or night!). Falling snow can decrease visibility, which is why it’s generally not smart to drive a car once snow begins falling swiftly.

You could send your drone off into the snow, lose track of where it went, and end up crashing it. Now, instead of just being exposed to the water from snowflakes, your drone is sitting in the ground buried in snow. It could survive if you retrieve it soon enough, but that would involve you finding it first, which should be no easy task.

Foggy conditions can also severely limit your visibility. If you can’t see more than a few feet in front of you, then it’s not a good idea to fly your drone that day. Like snow, it’d be really cool to capture fog in photos or video on your drone, but it’s just not worth it. You’re again at risk of crashing.

Also, fog is water, too. The vapor becomes condensed and hangs in the air, but it’s still comprised of water droplets. Should your drone fly through fog, it will get coated in water and not go far.

Okay, so let’s says it’s not a snowy or rainy day. There’s no fog, either. Instead, it’s a bit windy—make that very windy. There’s no risk of your drone getting wet, so why not take it out for a spin?

Well, because the average weight of a drone is about 12 pounds. A strong breeze can easily take your drone out of your control and send it careening into a tree or slamming onto the ground. Even a heavier drone that’s 100 pounds is still made of thin, fragile parts, so it’s not inconceivable that the wind could throw it around.

A smashed-up drone is probably toast, so once the winds begin gusting at more than 20 miles per hour, plan to fly another day. You’ll be glad you did.

Can You Fly Your Drone in Very Cold or Very Hot Temperatures?

You know better now than to operate your drone in fog, high winds, rain, and snow. What if the day is sunny, just very cold? That’s not much better for your drone. Most UAVs come outfitted with lithium polymer batteries. As the temperatures dip down lower and lower, these batteries begin decreasing faster than they do with regular use.

You could be flying on a cold day with everything going just fine, then out of the blue, your drone crashes because the batteries are dead. Depending on the height it fell from, the drone could be mildly damaged or wrecked, but neither is good.

The risk of flying a drone in hot weather is the system could become overheated and fail. From the cameras to the internal and external electronics, it can all stop working if the weather gets too soupy.

That doesn’t necessarily mean you have to stay home if you want to fly your drone in hot weather. If the temperatures won’t be as high as your drone’s max operating temperature, then have at it. Just fly at short clips to prevent electronic components from getting overloaded.

What to Do If Your Drone Gets Caught in Inclement Weather

You’re not a weatherperson yourself, so you use an app. These weather services aren’t perfect either, sometimes missing weather patterns and leading to inaccuracies. If you live and die by a weather app, then these inaccuracies can be quite frustrating, especially if you’re out flying your drone when the weather goes south.

It happens to many drone pilots at some point, bad weather striking seemingly out of nowhere. What matters less is where the weather came from, but rather, what you’re going to do about it. Your best bet is to stop flying your drone, collect it, and get out of the weather. Sometimes this is
easier said than done, though. For instance, if it’s raining, where do you land your drone? Look for a hard surface, such as a sidewalk or other walking path. Avoid landing the drone anywhere near the street, as it could get hit by a car.

Then, make a mad dash to grab it. If you have an umbrella, keep the drone underneath so it doesn’t get any wetter. A coat or jacket, should you be wearing one, can also be used to protect the drone.

What if it’s snowing? The entire world may be blanketed in white right now, leaving you with few options to land your drone. Again, you want a hard surface, but make sure it’s as level as possible. This way, your UAV doesn’t tip over a hill you didn’t see and take a tumble. Once more, retrieve it quickly, cover it as best you can, then hightail it to your car or other vehicle.

You may find that your drone got wetter than you would have preferred. Instead of panicking, take the battery out right away. If you have a towel handy, try to dry off the drone’s exterior as best you can. Your shirt or a jacket could also be used for this purpose.

If you see snowflakes stuck in small crevices of your drone, use some compressed air to remove them before they melt. Then, take your drone home and let it air-dry for a few hours. You can now put the battery back in. The drone may or may no be in workable condition, but if it’s not, at least you did what you could.

At this point we hope you know the answer to, “Can drones fly in bad weather?” It’s not advisable to fly your drone in bad weather such as fog, snow, rain, and strong winds. If you can’t see your drone because of reduced visibility, you could crash it without meaning to.

Winds can also take down your UAV, no effort on your part required. Snow and rain are no-nos as well since they’re made of water, which short circuits electronics.

Even freezing cold temperatures can suck up battery life, causing your drone to suddenly crash. The heat puts pressure on electronics, causing them to overheat and fail. It’s better to keep your drone out of very hot weather for this reason.

Now that you know to avoid flying your drone, you can make smarter decisions that can extend the life of your UAV. Best of luck!