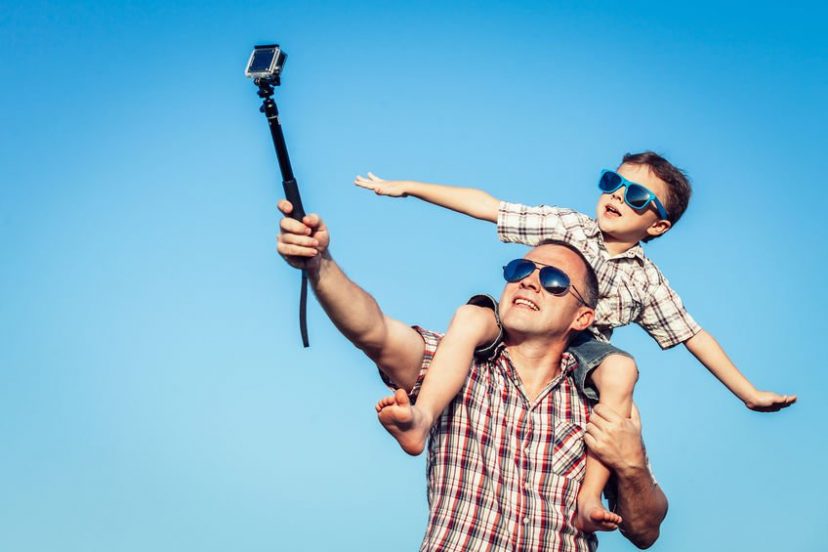 So you love the awesome video you can get from your GoPro camera, and now you’re wondering how to get some cool aerial shots, say, from a quadcopter drone. Or maybe you don’t even own a GoPro yet, but you love to fly your drone and want to know the best drone for a GoPro camera.

There are several great options for pairing a quadcopter with a GoPro. We’ll take a quick look at some of them here, so you can get some idea of which one you’d prefer to use to take the best video possible from up in the air.

We’ll focus on the drones in our list. These aren’t the only machines you can use, but researched many and narrowed our list. These drones rose to the the top of our list and after doing our research we found they are rated at the top of other lists too.

If you’re in a hurry and just want to check the pricing and availability of these drones, you can click the links in this list. Otherwise, you can keep scrolling and reading as usual to learn a bit more about each of them.

Best Drone for A GoPro Camera

You may or may not be surprised to learn that GoPro makes its own drone called the Karma. This light, yet rugged, quad is extremely portable, as it folds neatly into its own case for transport.

As you should expect, the Karma integrates tightly with the GoPro camera. The package comes with a Hero 5, and the Hero 6 works equally well with the system.

While the battery life, and thus the flight time, is a little on the short side at 17-20 minutes, the gimbal that the camera attaches to is rather special. It is located on the front of the drone, instead of underneath. This lets you tilt the GoPro camera upward for unique shots you can’t get on virtually any other drone.

And while there is no collision detection system, the video you get is extremely stable. It ranks at the top of this category compared to other equivalent models.

With automated take-off and landing and a return to home (RTH) function, you’ll find the GoPro Karma a joy to operate. If you would like a full review of the GoPro Karma check it out here.

The 3DR Solo quadcopter gives you about the same amount of flight time – 15-20 minutes – as the Karma. While this may feel low, realize that 20 to 25 minutes is about average for all drones in this group.

Programming done for the Solo lets you access many common functions with just a single button push. Accessing these functions does require a smartphone though.

The 3DR Solo has a Follow Me feature that many, but not all, quadcopters have. This a great if you want to be on the move while taking your videos.

DJI Phantom 2 – Takes Time to Set It Up

You can get a lot of video recording done in 25 minutes, which is the amount you should expect under good weather conditions with the DJI Phantom 2.

The Phantom works well with a GoPro 4. You get the gimbal for this camera (not the camera itself), but it does require some setup which some users have found a little difficult.

There is no first person view (FPV) capability with the Phantom, but you can buy an FPV kit separately that will give you this perspective.

Like most of these quads, the Phantom includes the handy return to home function. This is very useful when you’re done recording or for those rare times you lose the connection to your drone.

If you’re at all familiar with the name Traxxas, it’s likely because you know about their RC cars. The Aton Plus is one of their first endeavors in the drone world.

And Traxxas has made quite a splash into this world! The Aton Plus gives you 25 to 30 minutes of flight time, the common RTH function, and something they call Airbrake. When you engage the Airbrake, your drone will auto-stabilize, hover, and wait for you to give a new command. This is perfect for those occasions when – for whatever reason – your machine gets out of your control and you need to do something about it now!

There is no collision avoidance system, but with Airbrake and three flight modes – Film, Sport, and Expert – you probably won’t miss it. Since we’re talking about using a GoPro camera (in this case a Hero 3 or 4) with this system, you’ll most likely be using the Film mode to get the most stable performance from the Aton Plus and thus the best pictures possible.

Holy Stone HS700 – Have to Swap Out Camera to GoPro

The Holy Stone HS700 is different from most quadcopters in this category in that it comes with its own camera that is not a GoPro. However, you can easily swap the native camera for a Hero 3 or 4.

With 20 minutes of flight time, you’ll get a fair amount of video recording done before you have to bring your drone home. The main downside here is that the battery takes anywhere from 5 to 7 hours to recharge. You’ll probably want to get a second battery.

You get the common Follow Me and RTH functions, but you can’t adjust the camera while in flight. This is related to the fact that the HS700 comes with its own camera. Apparently Holy Stone didn’t think far enough ahead on this front. That said, the pictures you do get should be of excellent quality.

You may have noticed we didn’t try to pick one of these five cameras above all the rest. That’s because we think any of them would be a great choice to pair with the appropriate GoPro model.

There are small, but significant, differences from one drone model to the next. It’s up to you to decide which of these features is most important to you before you make your purchase. No matter which one you pick, we think you’ll thoroughly enjoy your choice and your time taking videos and pictures high in the sky.