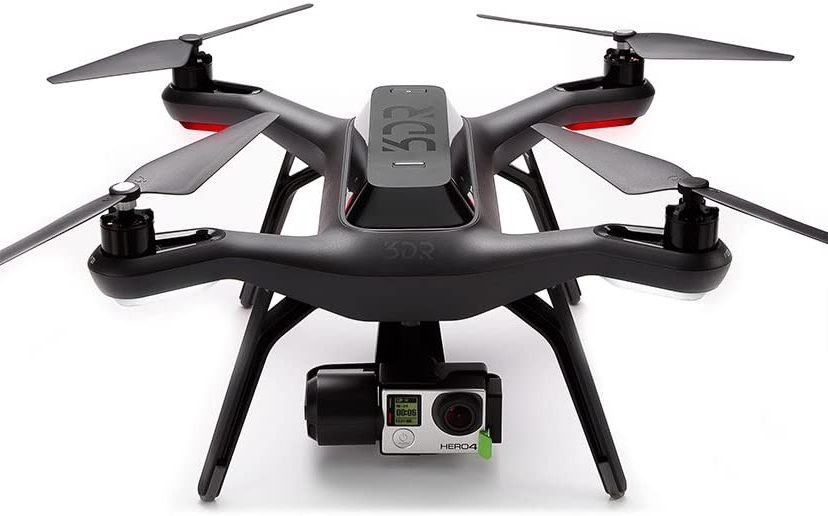 We will tell you right off the bat that, as of early 2017, 3D Robotics (3DR) no longer sells the consumer version of the Solo drone. You can still purchase one from other vendors, and it seems 3DR may continue to support this model, but you won’t find it advertised at the 3DR website.

What you get in the package will depend on what third party sellers decide to include. Originally the basic package didn’t include a camera and only had a fixed gimbal. You may be able to get a better deal than that today.

So, is the Solo quadcopter one that you want? That’s what we’re here to help you decide. If you’re in a hurry right now and just want to check the pricing and availability of the Solo at Amazon, you can click the link just below. Otherwise, keep reading to discover the particulars of this drone, so you will have enough knowledge to determine if this is the one you’ve been searching for. Other drones are great for the GoPro Camera as well Check them out here.

Let’s get the nitty-gritty out of the way first. The table below shows the important specs of the Solo.

*A second source says 7.2V, so we’re not sure since we don’t have one in hand to verify.

Reportedly, the Solo is easier to use than its main competition. Starting and ending a flight are both automated processes, so take-off and landing are a breeze.

You get a total of 5 advanced flight modes.

These modes are not available by default. You need to enable them via the app on your phone (or other device) which is needed in addition to the remote controller.

Fly:Manual mode is just what it sounds like. You, as the pilot, have complete control. There’s no auto-correction for wind or for altitude. This is one of the reasons these modes are in the “advanced” area.

Stabilize mode is like Manual, but upon release of the controls, your drone will attempt to hover in place. How well it does that depends on the weather conditions, of course.

Drift mode makes the Solo fly a little more like an airplane than a quadcopter.

Acro (short for acrobatic) mode lets you perform acrobatic moves like rolls and flips because orientation limits have been suppressed.

Sport mode is similar to Acro with the safety addition of overriding your piloting actions if you get the drone too close to the ground. (We’re not sure why the term “Sport” is used. Perhaps it’s because the Solo is giving itself a sporting chance of survival.)

If you install the (free) Tower app, you can choose an area on a map in which to fly, and the app will create a flight plan that the Solo will then execute on its own.

For video, Cable Cam mode lets you set up a path between two points so you can easily create flyby shots, panning and tilting as needed along the way.

Orbit mode causes your drone to circle around a central point, with the camera constantly pointed toward the center.

Pressing the Pause button on the remote control makes the drone stop and hover in place, overriding any other effects you had previously planned.

Using a Hero Camera with the Solo

The gimbal that comes with the Solo is designed to hold a Hero 3+ or 4 camera. To work with anything else, you’ll need a different gimbal. The standard gimbal only allows you to take pictures and video forward or downward at a fixed angle. Being fixed, you might notice vibration in your shots, depending as usual on conditions.

The optional gimbal upgrade lets you move the camera – pan, tilt, and rotate – while in flight. This setup also produces clearer results. With the ability to control the speed at which the camera moves, you can get very smooth – even professional quality – video shots.

If you opt for a Hero 4, you’ll get 4K video at 60 frames per second (FPS). This is generally the best in the business for this class of drone and camera.

Working with the Controller and Your Phone

As we mentioned above, you’ll need a phone to show live pictures from your Solo’s camera. The display on the remote controller is there to show the status of your drone – battery life, satellites available, flight mode, etc.

There’s a holder at the top of the controller where you attach your phone. As long as your device has a screen of about 5 inches or smaller, it should work just fine. If all you have is a larger screen, you’ll need to work out some other setup.

If you’re using a GoPro Hero 4 camera, you can control it via the phone app itself, instead of the remote controller. This may be the “other setup” that works best for your situation.

Verdict – Is the 3DR Solo Your Choice?

Though this may change and though you may disagree, we think the controller and app combination used with the Solo are better than those of its main competition (like the Phantom). The Solo is generally easier to fly, being a little more responsive and having better flight mode implementations.

We didn’t even really touch on the really techie details you can get into with the Solo, if that’s your cup of tea. But for those so inclined, you can get deeper into the guts of the machine with the SDK and other aides.

You may find a bit of a learning curve getting used to the Solo’s advanced modes, but in the end we think the effort is more than worth it.